Robust Air is a contract research project carried out at Aalto University, Department of Civil Engineering. The project was established due to evelated air content observed in some Finnish concrete structures. The aim of the Robust Air project was to secure the stability of the protective pore system in normal conditions. The stable protective pore system means that the air content or pore size distribution are not signiﬁcantly changing after mixing of concrete.

The main part of the research was made in the laboratory tests which were divided into two parts. In the ﬁrst part the concrete properties were altered and the same admixtures were used. In the admixture tests the concrete properties were kept constant and the admixtures were altered. The main interest of the laboratory tests was to analyze the air content of concrete as function of time. The measurements were carried out immediately after mixing, 30 min and 60 min and ﬁnally 75 min after mixing. In addition to the air content, also sensitivity for segregation was analyzed.

In addition to the laboratory tests, factory tests the Finnish concrete industry made tests in which the air content of concrete was measured after normal mixing time but also after 6 min mixing time.

Recommendations were given to minimize the risk for elevated air contents. The recommendations include development actions related to admixtures, concrete mixers, quality control systems and to requirements of frost resistance concrete. The concrete producers need to take the phenomenon better into account in the concrete manufacturing process. 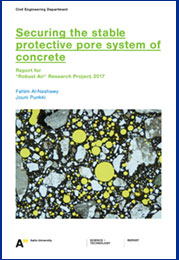