Accurate measurement of net oil rate from individual wells is a critical component in effective oil field management influencing production optimization strategies and financial allocation issues. Most net oil measurement approaches involve some type of gas/liquid separation, with the accuracy of the measurement dependent on the effectiveness of this separation.

In two phase, gas/liquid separator-based net oil measurement approaches, the presence of small, but unknown and variable, level of gas carry-under in the liquid leg of the separator can result in significant over-reporting of net oil. Due in part to demanding design constraints on separators for reduced foot prints, lower residence times, and higher turn-down ratio, it is not uncommon for gas carry-under to reach levels such that it is responsible for the majority of net oil measurement error in some applications.

Data from a field trial of this approach on a producing oil well is also presented. The data show the presence of small, but varying, levels of entrained gases in the liquid leg of a Gas Liquid Cylindrical
Cyclone separator in the range of 0% to 5% by volume, which, if not appropriately considered in the net oil measurement, would result in ~100% over reporting of net oil over a 9-1/2 hour well test. 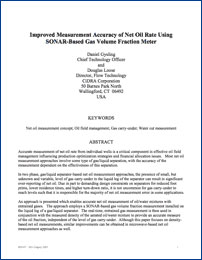