Passive sonar based mixture velocity measurement was evaluated on a DEME trailing suction hopper dredger. A conventional electro-magnetic flow meter served as the velocity reference. Evaluation was carried out over a period of several months and included various operating conditions; i.e. trailing, turning and dumping of both sand and silt type mixtures. Velocity of the mixture ranged from 2 m/s to 10 m/s at densities varying from 1 t/m3 to 1.8 t/m3. Results show very good agreement between passive sonar based measured velocities and the reference.

Passive sonar based technology allows a velocity meter to be clamped around existing pipework without any modification. Existing liner material, paint or rust does not influence the measurement. Unlike clamp-on ultrasonic meters, either Doppler or transit-time based, sonar based metering is a passive technology which works equally well in pure fluids as in mixtures. The sonar based meter on this trailing suction hopper dredger was installed by a crew of two in less than six hours during a bunkering stop.

Flow metering technology based on passive sonar has been available for years in slurry plant and pipeline management in a variety of industries. Applications such as a velocity meter on cutter suction dredgers have shown that the technology is a viable, robust and low-cost alternative to conventional electro-magnetic flow meter technology. Without any wetted parts and with no moving parts the passive listening employed in a clamp-around embodiment has proven to withstand harsh, ambient and operating, conditions for periods in excess of 10 years without any maintenance or recalibration.

Over and above mixture velocity measurement, passive sonar based technology can also be used to derive the Gas Void Fraction (GVF) from a measurement of the speed of sound in the mixture. The speed of sound is measured using exactly the same hardware and can operate independently and in parallel to the velocity measurement providing two separate outputs. GVF in the discharge line of the main dredge pump may show high values of gas, over 5%. GVF could be used to control dredging operations to maintain low gas levels to decrease solids carry over, reduce pump wear and help increase efficient dredging operations. 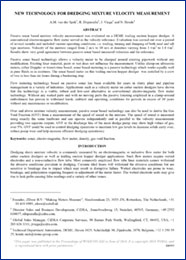