2011 MAPLA • Verification of Accuracy of Flowmeters

Verification of Accuracy of Flowmeters Installed in Mineral Processing Plants

A common problem and the source of much confusion in minerals processing plants is how to determine if flowmeters that have been physically installed are operating properly. This is a challenging task due to the difficulty associated with passing a controlled amount of fluid through the meter and the inability to remove the meter for testing. Several techniques are available to verify operation of the flowmeter – the entire system as well as subsystems – all of which fall short of a true laboratory calibration. However, when carefully executed these techniques can provide the user with a satisfactory level of confidence.

Next, verification by tank test is presented, which provides the user with the greatest assurance and lowest uncertainty of the flowmeter accuracy. The basic test steps are presented, and the various uncertainties are examined and quantified for a typical test. Although the most useful, this test is often the most difficult to implement; therefore, other techniques are presented.

For flowmeters installed in closed circuit grinding applications in beneficiation plants, an available technique involves comparing the flow through the cyclone battery with the theoretical cyclone performance using cyclone inlet pressure and manufacturer’s performance data. Additionally, the meter performance can be determined by looking at correlations between flow rate and other parameters, such as pump amps or pump power.

Finally, techniques for verifying performance of flowmeter subsystems are presented, which involve electrical tests performed by the flowmeters themselves, as well as tests with external dedicated test instruments. Advantages and limitations are discussed. 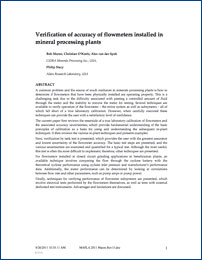