On-line Measurement of Rheological Parameters for Feedback Control of Thickeners

Thickened tails and pastes often exhibit a yield point and a plastic viscosity which varies with the shear rate. The flow of such fluids through pipelines differs markedly from the flow of more dilute slurries in at least two aspects. First, the variation of the shear stress at the wall with the shear rate at the wall will change with varying rheological parameters of the fluid. Second, the mechanism by which mechanical energy propagates between length scales to final dissipation will change with the degree of turbulence exhibited by the flow.

Whereas shear stress at the wall is trivially related to pressure gradient and, thus, easy to measure, the shear rate at the wall is much harder to evaluate as this would require a velocity profile near the wall. Measurements of velocity profiles in turbulent flow of waterborne slurries and in flows of Bingham fluids show little variation despite their differences. In homogenous fluids, however, the ratio of fractional change in wall shear stress to the fractional change in dimensionless rate of flow is firmly related to the shear rate at the wall. Robust flow measurements combined with reliable differential pressure data, there-fore, allow on-line determination of fluid rheological parameters necessary for feedback control. 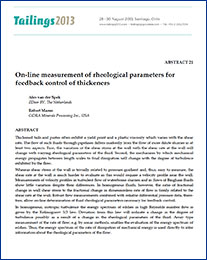